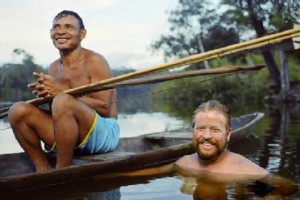 Whether you like it or not, language governs every aspect of life. If you want to communicate with someone, you need to use language. It’s inescapable, so much so that life becomes virtually impossible without it. If you’ve ever studied or mastered a foreign language, you will understand that words and concepts don’t translate very simply from one to another. The way we express things changes drastically depending on which one you speak. These differences have led linguists to hypothesise that the language we speak alters the way we see the world. This concept is known in linguistics as linguistic relativity, or sometimes the Sapir-Whorf hypothesis.

“How can this be?” You may be thinking to yourself. You may have experienced this theory in the classic example of the Eskimo languages that allegedly have over 100 words for “snow”. While difficult to prove and still the subject of centuries-old arguments, these examples might lead you to think that this has little to do with language and more about environment and culture, and that the world around them has altered their language rather than the other way around. So let’s look at some more examples.

The Pirahã language, spoken by a small, primitive and untouched tribe in northern Brazil, appears to have no number system. All they use is two words, hói and hoí. It is unclear whether these words mean one and two respectively, or few and many. The language also has no words for colours and no recursion, meaning that the Pirahã cannot say”John’s brother’s house” but must say, “John has a brother. This brother has a house.” in two separate sentences. Imagining English or any other language with such conventions is impossible, as they form the very fabric of our day to day lives. We wouldn’t keep time or save money, and society would be catapulted back into the dark ages. Whether the language of the Pirahã inherently inhibits the progress of their society is debatable, but it could be claimed.

In most languages you are likely to encounter, time is one of the fundamental aspects of our lives. Whenever we express an idea, we must use a verb, and mark that verb with tense. This means we must specify when the action took place. This could be right now, in the past, or in the future, meaning that it hasn’t happened yet. However in some languages like the Native American example of Wintu, this is not the case and time is not a factor when conjugating verbs. Instead, the grammar forces the speaker to specify evidentiality, such as whether they saw the event, whether they heard it, whether someone told you, whether it was reasonable to assume it, or whether it apparently happened. For Wintu speakers, the legitimacy of the event is far more important than when it happened. The Wintu language is unfortunately critically endangered, and linguists are taking steps to try and revive it.

Future markers make it harder to save money?

But what has this got to do with me? You might be wondering. Well, studies a lot closer to home have suggested that your native language could be shaping your world view. Going back to verbs and tense markers, English is a language that requires a future marker to describe an event that has not yet happened. In the sentence “tomorrow it will rain”, the will is essential so you know that you’re talking about the future. However, German for example does not require the future marker; morgen regnet es. A study by economics professor Keith Chen of Yale University found that people whose native languages do not require future markers don’t have the same perception about the present and the future as people whose native languages do. In other words, when the future is no different from the present in a grammatical sense, they are not treated as different things, meaning that speakers of these languages save money much better since they view the future as equally important as the present. They also have safer sex, are less obese, smoke less and retire with more wealth. Maybe the reason you have that due tomorrow, do tomorrow attitude about your work has less to do with your laziness and more about your language! Check out the video for a more comprehensive explanation.

Conclusions and a riddle

So if you’ve never considered that the very language you speak may have an impact on the way you see the world around you, maybe in the future you will. (Unless you speak a language with no future marker, that is!) I’m going to end with a riddle, the answer to which you can leave in the comments. I’ll reveal it in my next blog post as well, as well as why when it was explained to my Italian friends in their native language, they couldn’t get it right!

A father and his son are in a car accident. The father is killed instantly and the son is rushed to hospital. At the hospital the doctor looks at the boy and says “I can’t operate on him, he is my son.” How can this be?

Thanks for reading and until next time.